The American Experience Through Music 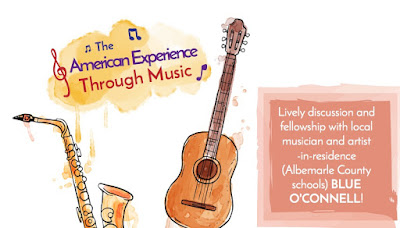 Back in the late 90s I worked as a temp at the University of Virginia International Center .   Something I enjoyed most while working there was watching them learn about American culture in their English language groups. My favorite was their book group where they would read American novels and discuss them. I was challenged by the teacher then to summarize, "To Kill a Mockingbird," in one sentence. It cannot be done!

The book group gave me the idea that a similar study group could be formed to learn about American music.  So, my new series was born. In our first lesson we discussed, "This Land is Your Land," "Swing Low, Sweet Chariot," and "Wayfaring Stranger." They are great examples of a folk song, African-American spiritual and a Gospel song respectively.

I passed out the lyrics and sang for them and each song brought up questions and comments. What does it mean "No Trespassing?" in "This Land is Your Land"?  One student answered, "not allowed?"  Yes and that was the main point of the song because the lyrics say next:

"On the other side, it didn't say nothing
That side was made for you and me."

In other words, this land is made for everyone. No matter your social class, ethnic background, skin color, etc. "This land was made for you and me."

Next I asked, "How does the song, "Wayfaring Stranger," make you feel"? One student answered, "It makes me feel like how I feel right now, far away from home." Yes. It's a song written back in the 1700s about the plight of the pilgrims and the hope of going to a better place in the afterlife.

Then I showed them some videos of Bluegrass music  Bill Monroe and Alison Kraus.  But the real treat was of this performance of the popular Old Time band  Carolina Chocolate Drops:


Our next class we'll focus on Blues and Jazz. Looking forward to that!!
Posted by Blue OConnell at 3:47 AM No comments: 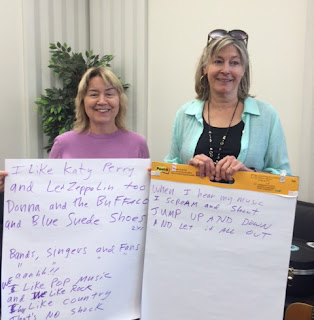 Do you remember times when you were so excited about something you could not sleep? Times when after something so joyous happened to you that you daydreamed about it for daze (pun intended :) afterward?

Working with this group of special needs young adults this week brought back that feeling for me. I collaborated with a local music therapist and together we taught a workshop on songwriting. Of the topics voted on (choices were: fall, friendship, love, music) - the group decided to write about music.  Everyone contributed some of the lyrics and together we came up with a song that made everyone so happy to sing.

The first verse listed favorite bands and singers - Katy Perry and Led Zeppelin made the list. The chorus was my favorite part.  We sang, "Bands, singers and fans."  I remembered being a child when the Beatles' movie, "Help" came out and being in the audience while young women screamed through the whole thing. (I did not understand this at all).  Remembering how crazy excited some people can get about their favorite music, I suggested that we screamed after singing the word, "fans." That really made our song fun! Every time we came to that part- everyone jumped up screaming like a crazy fan.

This made me remember times in my teens when I saw a concert that was so good, I did not sleep afterwards and I would daydream in school for days after. When I first started playing the guitar, I loved Neil Young and I can remember a concert I went to where I ran down to the front of the stage and just stared up at him. It was hard to believe he was a real human being and not something larger than life.

It's been a long time since I have felt that kind of super charged excitement about things. Sure, I feel enthusiastic and happy but it is a more calm version from what I felt as a teenager. It was a good reminder of being in touch with the simple things in life and being happy.

Have you been to a concert recently that had you all jazzed up? Keep up that joy! :)
Posted by Blue OConnell at 3:26 AM No comments:

Tales from a Blue Heart 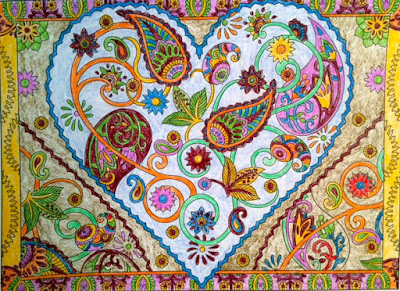 This fall I am entering my 12th year working at the hospital as a therapeutic musician. It continues to be such a rewarding job that I love so much.  I meet people in what may be one of their worst moments in life. Though I walk in their room a stranger, music brings them comfort and connects us in a way that nothing else would. Since the guitar is such a popular instrument,  many feel an immediate connection to it and either play the guitar themselves or know someone close to them that did.

Yesterday, when I presented myself to the nursing station at the NNICU (Neurological ICU), I was given a patient to play for who was being visited by his family. The nurse said, "it's a lively group in there!"

Sure enough, it was a  lively group of 7 family members all from MI come to be with their loved one in the hospital. When the patient saw my guitar, he asked for Jimi Hendrix.  (I often get these kinds of requests, which are meant to be jokes :)   Yet he did not know that Jimi Hendrix was one of my biggest inspirations for taking up the guitar back in 1975. That was a time when bands like, Led Zeppelin, Yes, Jethro Tull, Black Sabbath, Pink Floyd,  were popular.  At the recreation center where I hung out in high school, we used to make up line dances to Jimi Hendrix songs. Back then I was so absorbed with the music, I did not dance with them but sat right next to the speaker and drummed along with the songs. (I was a drummer in high school band)

Anyway, his Hendrix reference gave me ideas for music he would like. Usually in ICU, I don't play much upbeat music or pop songs because I am usually working to relax the patient and bring down their heart rate. But this man was sitting up in a chair (often this means for medical reasons they need to be "up" physically for circulation and other reasons).

So I launched into the Beatles, "Here Comes the Sun" as my first song. Instantly I saw the song was known and loved by everyone in the room. Two of the women got teary eyed and had an expression of surprise.  I often feel an intuition of what to play and I was glad I hit a common chord with them.

The man was eating his lunch and nodding along to the music as the others were video taping and photographing me. I used to be uncomfortable with this kind of reaction but I realize it is not a usual occurrence for people to experience live music in a hospital room.

Since the patient was a guitar lover, my next selection was "Classical Gas" -- a very famous guitar instrumental. I find that song is a real connector because it is so well known and everyone seems to have memories attached to it.

After a few more songs,  we all sat and talked awhile and I learned they were from Michigan which is also where my family is from.  When I was getting ready to leave, one of the women collected money to give me as a tip. I told them I appreciated their generosity but I could not accept it.   I don't often get people doing that, so I was a little overwhelmed by the gesture. Also, I didn't want to hurt their feelings for wanting to give back to me. In the end, they understood why I didn't take the money. Also they gave me much more than any money could give.

Pictured in this post is a coloring piece I did recently that I call Tales from a Blue Heart. It is about healing from the grief of the loss of my mother as well as one of my best friends. Though the heart is blue, it is surrounded by love and memories.
Thanks so much for reading and Happy September!


Posted by Blue OConnell at 5:12 AM No comments: