Finding the right song can open the door to connection 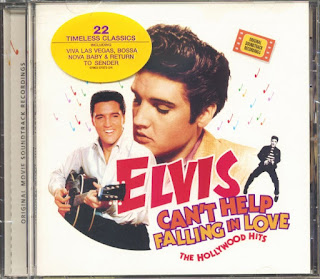 This week I had several good experiences in singing with my nursing home groups. It's amazing how one song can open up a door that was not there before.  For instance, there is one elderly woman at one of the nursing homes who used to yell out things when I played my guitar (instrumental).  I play my "Sundowning Serenade" to help calm the dementia residents there. Most of them relax or doze off while listening. Ms. Martha would say things like, "That's enough of that!", "How much longer do we have to listen to this crap?!" and so on. Because she is ill, I know not to take this personally. Even so, it's not pleasant to have that happen. The other night though, something cool happened.  I went through my repertoire and tried to think of a song Martha would know and like. I found Elvis Presley's song, "Can't Help Falling in Love." Well, what do you know?! As soon as I started playing it, Martha started to sing along! In the two years or so I've known her, she has never done this.  Guess what I will play for her from now on? That was a good feeling to find something she liked.

Yesterday I was over at another nursing home and at one point a man there named Johnny said he wanted to share something. Johnny is someone I have known now for about ten years. He uses a wheelchair and he is pretty severely disabled.  However, he has recently had some positive changes and healing take place. He told the group that he can now use his hands and move his feet and sit up straight and all sorts of other things he was never able to do before in his whole life. As he revealed another example to us, he would start to cry.  Everyone was so moved by his sharing with us. One of the ladies said, "Bless you." and knowing he is a man of faith, I asked him if he'd like for us to sing, "Amazing Grace" for him. We all did sing this song and there were more tears, especially during this verse:

"Through many toils and trials and snares
I have already come
Twas grace that brought me here thus far
and Grace will lead me home. "

At another place down the road where I sing, they like to sing old songs like, "Will the Circle Be Unbroken," "I Saw the Light," "Do Lord." All of these people I see have such interesting stories to tell. We often talk in between songs and tell of a time we used to sing a given song.

Singing with others is so much more than singing. Music is the bridge that opens the door inside the window to their heart.  How rich I feel to know these people who inspire me and enrich my life.
Posted by Blue OConnell at 12:09 PM No comments:

A Concert to Remember 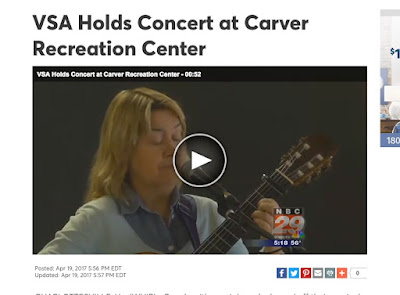 One of my favorite events of the year is the annual VSA Charlottesville/Albemarle concert. Formerly, "very special arts," VSA is part of Therapeutic Parks & Recreation department which provides arts activities for people with disabilities. This is my 9th year doing musical activities with groups in VSA.

This year I really enjoyed accompanying a group of 15 students singing, "Let it Go" from the musical Frozen. It was a lot of fun rehearsing this over the past month because they were all so excited about this song. In the concert, we were last in the line up and which was an energetic and empowering way to end our yearly concert. Doing this Disney song on solo guitar was a challenge for me.  As you know from the song, it is an orchestrated song with several instruments and it was hard to get the same dynamics on my guitar but I think it worked out well.

I also sang a song called, "Blue Wings" which is a poem written by George Eliot. She is the writer from the Victorian era who is most known for her novel, "Middlemarch." Not many know that she also wrote poetry. Last year I set 6 of her poems to music and "Blue Wings" was one of my favorites. I hope to do a recording of these and video this summer. Stay tuned!!

Everyone did so well in the concert. One of my favorite performances of the song, "Hallelujah" by Leonard Cohen. It was sung by my friend Jessica in her beautiful voice while Amanda interpreted in ASL (American sign language). Wow! That was powerful.

We also had hand bell choirs, African drumming with Whit, a John Denver song by Bill, a classic rock song by Chris.. it was truly a wonderful community effort. This happened a few days ago and I am still jazzed up about it.

The picture above is a screen shot taken from the TV news clip Channel 29 did about the concert. They were there through the whole concert and I was on for a few seconds. Thanks again to all who came out to support us on our special day.
Posted by Blue OConnell at 4:43 AM No comments:

Vitamins for the heart and soul

I love my work playing therapeutic music for hospital patients in ICU. The other day I had an interesting experience.  When I play for ICU patients, I mostly improvise simple melodies with simple chord progressions. If you think of the music being like a food that feeds the heart and soul, it needs to be very easy to digest for someone who is very ill.

The other day I was playing for a man who was hooked up to life support and barely conscious. I know that he could hear me because his heart rate would change anytime I tried to play in a musical key other than C.  That is something I do when I play for critically ill people, I look for their comfort zone and try to stay in that place while they lock into the slow rhythms and peaceful melodies.

I was playing parts of a piece I composed for my mother this past winter that has some major 7th chords. Stevie Wonder uses lots of major 7th chords, by the way. The song, "You Are the Sunshine of my Life" opens with a CMaj7 add 9 chord in the introduction. If you just listen to that chord, there is something kind of magical about it. It is soothing and uplifting and it sounds like love. If you had to find a chord that represented love, this one would be a good choice.

Anyway, I was improvising with these kind of chords for this patient and playing very slow, arpeggios and I was envisioning a peaceful pastoral scene in my mind's eye to bring him to. When at times I moved to change into a song in another key (of say G or D), his heart rate immediately went up. Hm. Ok, I went back to the key of C. This is a key that is found in a lot of country and pop music. It's a pretty comforting and familiar sound, one that would feel like "home." In playing for him for nearly 30 minutes, I saw how comforting it was for me to stay within a small confines and think up new melodic motifs and come back to other ones used before to help him focus.

So here's some homework for you.  As you go about your week and you are listening to music, be aware of what musical key you seem to really respond to. Just look up the song on google  with the word "chords" and you'll find the lyrics and chords. See if your favorite songs are similar and use the same chords. Do you have a favorite key? I am partial to the key of E and one of my favorite chords is F#minor.   How about you?
Posted by Blue OConnell at 12:09 PM No comments: