Today I played over at JABA with my friend Ben who is the activities director there. It's a lot of fun because I so rarely get to play with someone. Ben sings harmony so well and he plays a lot of guitar solos and the harmonica, which adds a lot to the sound. What I love most about it is that the folks there dance to our music. That is something new for me and something I like a lot.
I mostly do sing alongs and so at some point I was singing some that other folks like to sing.  After leading, "Battle Hymn of the Republic" Ben said that he was told not to sing that song here in Virginia because it was a Yankee song.  That's a new one on me!   So to balance it out, I sang "Dixie"  (which by the way I only learned in the past year as a request. I never learned it growing up in Chicago)

My favorite song Ben sings is, "Big Boss Man". Here he is playing for the camera: 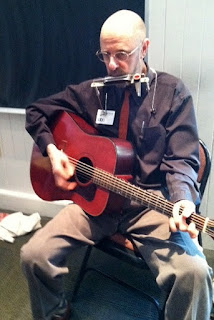 Posted by Blue OConnell at 11:44 AM No comments:

I had such a nice time playing at this gallery in Harrisonburg last night! It was a small but very appreciative audience. It is such a good feeling when people really resonate with what my songs are about.  Something I love about doing gigs are the surprises that surface.  In the case of last night, I had written down a couple of ideas for songs to play and I nearly scratched an idea to do an Am medley.  This medley includes a few of my own original instrumental pieces as well as some known ones like "Classical Gas" and "Shine on Harvest Moon".    So it was a pleasant surprise when I decided to go ahead and play it that the audience really liked it.

Quite often when I play out for people, I do a fair amount of talking in between songs. Many times things i say are not at all planned out and I find myself surprised by what surfaced. Last night I told them that as a girl I dreamed of being  a detective.  I was influenced by TV shows growing up such as, "Mannix," "Mission Impossible", "Perry Mason", "Man from U.N.C.L.E.", "Get Smart", etc. You get the idea. I told them that being a performing musician was the closest thing that would resemble being a detective. This is because from gig to gig, I never know what will happen. Who will show up, how they will respond, what the place will be like.. etc. Each time I am often surprised by something.

I am glad I found a way to live an adventurous life! Here's a photo from Oasis last night: 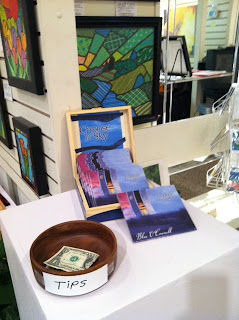 Posted by Blue OConnell at 8:23 AM No comments:

I am so lucky to work with the folks of VSA, which is an organization dedicated to promote experiences in the arts for individuals with disabilities.

I work with groups of young adults with intellectual disabilities leading sing alongs. In the spring we put on a big recital here at the MLK Performing Arts Center. Each January, we also have a big art exhibit here. There are lots of very talented artists in VSA.  I often play music during the exhibit opening and it's a great gig.

Check out the beautiful colors of the artwork on the walls behind me: 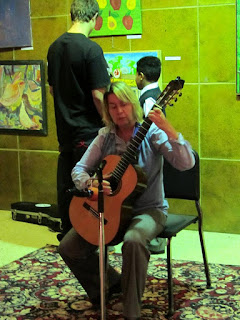 Posted by Blue OConnell at 4:09 PM No comments:

I had a gig in Phoenix the first week of this new year and that was a lot of fun.  A few people from an online guitar forum came out to see me.  We have "known" each other online for well over a decade but I met them in person for the first time at my gig. That was very special!

Fiddler's Dream coffeehouse is a really unique place. It's very small and all acoustic (no amplification used) and it reminds me of my days working in a folk club in Chicago when I was in my 20's. This was my second gig there and I hope to do more!  It's these small unusual places that made me fall in love with the folk/acoustic music scene when I was in high school. (mid 70s)

Here's a photo from the gig, check out the hand painted sign behind me: 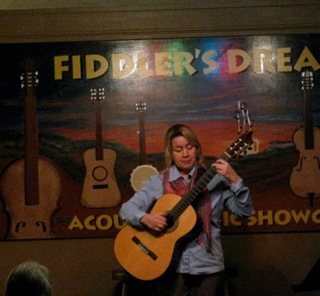 Posted by Blue OConnell at 9:48 AM No comments:

While in Phoenix, I spent two days at Arizona State University working with a cochlear implant research lab team.  It was really challenging and I learned a lot! I really enjoy taking part in research and what comes to mind is how much my hearing loss has added a new dimension to my life. What could have been a devastating thing to have happen, has turned out to be quite an interesting life. I met some very interesting people at ASU and will be going back sometime next year. 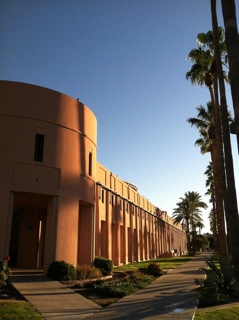 Posted by Blue OConnell at 9:44 AM No comments:

Last night I performed in a First Night community event for the first time in 15 years. I have really missed this event! I used to be a regular here in Charlottesville in the early to mid 90s. But then they got new management and things changed.

This time I played at the First Night Harrisonburg which was a lot of fun. I got to see some old friends I don't get to see often.
I can say that being there last night and playing my music for some new listeners and being part of that was one of my happiest memories of the year.

All of 2011 was focused on getting my  CD finished. First by creating the Kickstarter video to raise the money to finish it, then having my friends record their parts (Mary Gordon Hall on harmonies and Peter Markush on cello) , then getting the CD art work done (Browning Porter)... it took until August to get the CD in my hands.

The rest of the year was playing gigs and celebrating the CD release.

Thanks to all those who have supported me through this effort!
Happy New Year!

here's  a shot of the fireworks at midnight in Harrisonburg 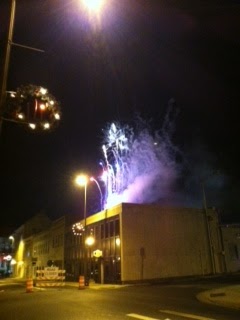 Posted by Blue OConnell at 8:54 AM No comments: