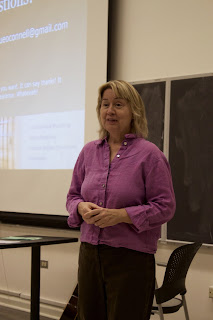 Last week was very busy and interesting.  I love the diversity of my work. On Tuesday, I spent the day at JMU as a cochlear implant research participant. The day involved working on one test which I had to listen carefully to a series of two conflicting beeping lines of sounds --one in low frequency and the other in high frequency. The task was to determine whether there was a delay at the end of the line or not. This one task I did for 4.5 hours! I was to focus on the low sound while the high frequency sounds were there to try to distract me. At times I felt really able to hear the delay in the line and others I could not tell at all. Doing such focused tests can be hard but it is also fun for me.

On Thursday, I gave my second presentation to UVA's international students in my series, "The American Experience Through Music." This class I taught them some Civil Rights songs and how some of the old African Spirituals were brought back into popularity during that time. Songs like, "Oh Freedom," "Sometimes I feel Like a Motherless Child." We especially enjoyed singing together, "Calypso Freedom," which is an improvisational call and response chant based on the Jamaican song, "Banana Boat Song" by Harry Belafonte (who was a big civil rights activist)  The picture above is of me at Minor Hall at UVA with my ESL students.

Friday I co-led a songwriting workshop for my VSA (very special arts) group. We gave the class a list of subjects to vote on to write about: Animals, Friends, Birthdays, Holidays. They voted we write about all of these :) So, we brainstormed to vote upon two animals who become friends and they were a horse and a turkey. We then gave the students options for the kind of song to write: Blues, Bluegrass, Country, etc. They decided they wanted to have the song be both a Blues and a Bluegrass song. Hm.  I was not sure how we were going to pull of of this together but we did it! And the resulting song was very funny! It began as a Blues song where both the Horse and Turkey had the blues because they were all alone. Somehow, they meet and become friends and that's when the song turns into Bluegrass. The students were divided up as either a Horse or a Turkey and they made sounds of the animals when it came to expressing their voices.

It was all a lot of fun and now I am ready for a new week. I wonder what will happen next ??