You're Here Not By Chance 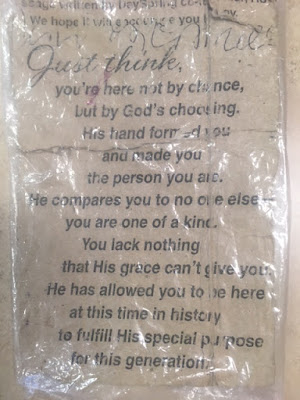 Every Wednesday night I go down the street to sing for some nursing home residents.  I find them all sitting in the hallway after dinner. I  have my guitar strapped on as I stroll the up and down the hall singing to them all.  I've been going there now for 7 years. Over the years I have seen many residents come and go (they are all quite ill by the time they take up residence here).  Most of the staff has been there longer than me but I've also seen a lot of them come and go too.

Even so, there have been times when my presence there seemed to go unnoticed. A Wednesday would come and I'd make my rounds seemingly invisible and go back home. At times when I'd be away or missed due to being sick, no one ever remarked on my absence.

All of this changed recently, however.  For I had missed a week due to not feeling well and one of the nurses came up and said, "Where were you last week? They were all waiting for you." Hm. I had never felt that way there before, seemed no one noticed me much. But it was true.

Last night I showed up and a man was waiting by the door. As soon as I got close enough, he punched in the code to unlock the door.  I thought he was going somewhere and asked, "Where are you off to?" But he said he was waiting for to help me in and that everyone was lined up to hear me.

Sure enough, they were. All 15 or so of them were lined up outside of the nursing station waiting for the music. As soon as I started singing, one of the nurses came and started singing and dancing and conducting along with me. The residents smiled and seemed to really enjoy it.

The above picture is something one of them took out of their purses and asked me to read. You can see it is very old and tattered and wrapped in plastic for safe keeping. I was touched by her saving this and feeling so much a part of their lives there.

I was wrong that I was not noticed. Jt may be true that some people due to illness are unable to show or acknowledge what I bring but they do notice. It's good to be reminded of that at times.
Posted by Blue OConnell at 5:16 AM No comments: 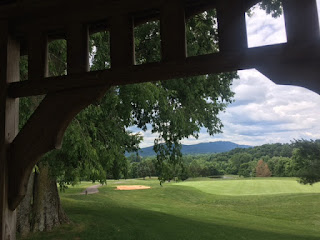 Someone once told me, "Everyone needs a path for growth." For some it is a relationship, for others it's their work and for me it is music. I learn so much about life from my music studies and practice. Here's what happened to me this past week.

I have a classical guitar piece I learned nearly 30 years ago that I play each day as a warm up. It's not a piece I'd ever perform in a concert but it is one I want to keep in my repertoire. Recently, I developed a memory block on the ending of the piece. Though I can hear it in my head, my hands do not remember how to play it. So, I was faced with the option of giving up on the piece (I'd never perform it anyway), or getting the music out and spending time re-learning it or I could improvise a new ending!  I went with the last option and today I had so much fun with it!

For me music is not only a source of growth and self discovery, it is also a source of joy. Today I played this piece (Weiss Prelude in Em) over and over and gave it a new ending each time.  It made me laugh to do this. I have to admit, I do prefer the "real" ending that S. L. Weiss composed but making up a new ending opened up new possibilities for me. It made me see that I don't have to do what someone else wrote down, I don't have to "color in the lines" or think in their box. I am free do see this piece of music as a recipe where I can add my own spices and flavors and herbs and make it my own.   It is such a freeing and empowering feeling.

It makes a good metaphor for my life too. If I see this old piece of music like an old story from my life and one that I have told the same way over and over --am I not free to give the story a new perspective, a new ending?   I know that endings of stories generally have a resolution or some kind of impact. What if we didn't keep the same ending? What if we improvised as I did and let the music take me to a new place?

I invite you to try this in your art or writing or music or your life. See where it takes you. It may make you laugh!

The picture above is from a gazebo in a park near where I live. I like to go there and let my mind wander. In fact, that's where I am heading now. Have fun rewriting your endings! :)
Posted by Blue OConnell at 9:31 AM No comments: