Songs for the underserved 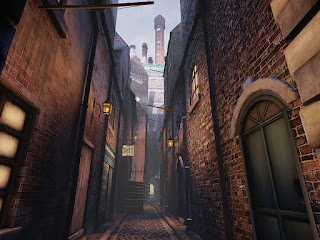 When I was a child growing up in Chicago, my "playground" was the alley. I spent many days by myself going through trash, exploring abandoned buildings, climbing up garage patios, hiding out.  For years after we moved to a nicer neighborhood, I dreamed of those alleys and being lost in the dark. I still have those dreams now and then. Like this photo above... in my dreams I am walking in places that have no street names, no one is around,  I am alone. There are places where I sing that give me a similar feeling of being on the edge.

There are places where I go to sing for  under-served people. These are people much like the ones I met on the streets in Chicago --the ones my mother warned me to never talk to. (which I never listened and came home with countless stories). Maybe it is why I feel a special kinship when I play at the mission home in town. It's a dark place with people screaming in the corners and trying to climb out of their wheelchairs. Where the staff walk right by them and do not help--as if they've seen everything. I keep on singing no matter what's going on.

Last week at the mission home, I befriended a black woman who asked me when my birthday was. "Oh a winter baby!" she said when I told her the December date.  I sang some old African spirituals and after each song she said, "Oh yeah!" She was the only one out of a room full (about 25) of people who was listening.

The next day I went to work at the hospital and played for a patient who was on suicide watch. The patient was in restraints and hooked up to life support and very agitated. I tried to surround her with the beauty and comfort of guitar music. There was a guard standing outside the door watching and listening.  I didn't know this patient was on suicide watch until I went to leave and asked if the guard was there to monitor the vital machines (bells kept going off and the guard kept coming in to turn off the alarms). The guard said, "No, she tried to kill herself."  Wow. It's hard to imagine life can be that bad for some people. I had hoped my music did something for her spirit.

There are things I see at times that gives me perspective. It makes me grateful  that I have work doing what I am here to give.  People often think being a full time musician is a lot of fun. And it is. But it is also a kind of work others cannot imagine. This was a week in the alleys of mankind. Hope I struck a chord to show them there is still beauty, peace, hope.
Posted by Blue OConnell at 2:59 PM No comments: 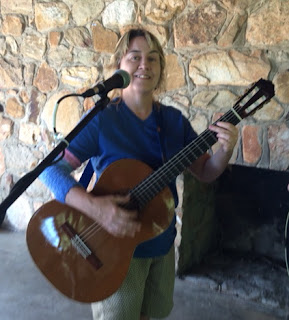 Late summer and early fall is one of my favorite times of the year.  One reason is two of my favorite gigs of the year happen in late August. The first is the Charlottesville Therapeutic Parks & Recreation picnic. Each year all of the staff and many participants in our programs come together for a few hours and make music, art, play games and have a picnic.  I love singing with this group because though the picture has me alone--you can't see that to my left is Barbara on the piano and Chris singing and playing next to me (and Wayne taking my picture.) It's a time when I get to sing harmonies and bring up people to our little stage and back them up.  It's a time when I get to see some of my favorite people that work for parks & recreation. I don't see them often because throughout the year, we are involved in different programs all over the city and county.  Also there are new families and people to meet at the lunch table. I like hearing stories from parents who say things like, "Parks & Rec has made a world of difference for my child!"

Then later that same day, I got to do my other favorite gig which is an annual Women's Gathering in a rustic community 30 miles from here. I lead a scared songs and chants circle and it was so enjoyable joining with women and girls singing our favorite goddess, Native American and sacred chants and songs. The favorite that was chosen to sing at the open mic later was this one:

"We are the rising sun
We are the change
We are the ones we've been waiting for
And we are dawning."

I love all kinds of music and opportunities to connect with different kinds of people in different kinds of settings. I was marveling at the fact that just days ago I was in NYC amidst the hustle & bustle, noise and intensity in the city that never sleeps. Then yesterday being out in the woods singing Native American chants. The diversity of experience enriches my life so much.

Now, it's back to practicing music for my upcoming weddings. It is a great job, being a musician!

As always, thanks for stopping by and feel free to leave a comment or email me and say hello!

I hope you are having a good summer's end. What does this autumn bring into your life?

Posted by Blue OConnell at 11:35 AM No comments: 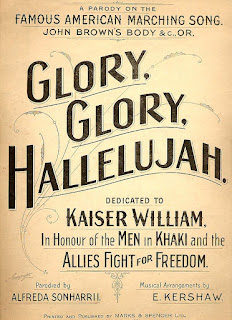 It's been a good week singing with my older adult groups. What's been especially fun is how a song will spark a memory. For instance, when we sing, "She'll Be Comin' Round the Mountain," the last verse gets a laugh with: "We'll be wearin' red pajamas when she comes. " Everyone remembers scratching mosquito bites until they bled.

The song, "Down By the Riverside," led us to remember summer camp and I told of how I used to wear Noxema on my nose after a day down at the beach and getting a bad sunburn. This led to an animated discussion --is Noxema still being made? Don't you just love the smell of it? What was in it that made your skin feel so cool and good on a sunburn?

Since many times we sing songs connected to a holiday of that month, I only recently realized that August is the only month that does not have a holiday! We talked about that too. "Really?" Ms. Ruth asked doubtfully.  Yes and we went through each month and named the holidays. Then I sang, "Joy to the World," and said why not? It says nothing about Christmas in it.

I've enjoyed a new trend lately that some family members have gotten involved and sing along with much gusto. This gets everyone even more into it. Last night one woman who usually never sings sang along with us for the Battle Hymn of the Republic. A song with a good refrain is always a good one to get people singing and everyone knows, "Glory, glory hallelujah.."

It's true you'd think people would tire of the same old songs but we don't. After all, we watch some movies over and over again too. They hold memories for us and tell our stories. It is a lot of fun!

Posted by Blue OConnell at 6:09 AM No comments: