The true spirit of Christmas 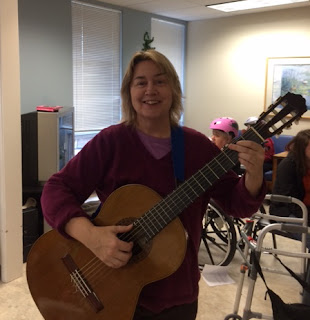 Today I played my last Christmas party of the season. I have to say that I am somewhat glad as I have been playing this music since the end of November. I've been feeling a little worn out from all the holiday traffic, endless rain, added activity level with low motivation.  Sometimes it feels like it is all up to me to cheer everyone up and I need some help now and then. Today, I got it.

I was so impressed when I walked into the office of the activity director at one of the nursing homes I play at each week. I could barely get in the door as there were bags and boxes of wrapped presents, canned goods for those in need, eggnog and cookies for our holiday sing along.  When I commented on all of the gifts and things in her office, Mary laughed and said, "Oh yeah, I've been wrapping presents all week and getting ready for our caroling event on Christmas day."  She then told me with a twinkle in her eye that all the staff are going to go around room to room and sing Christmas carols on Christmas for the residents.  Now that's the spirit of Christmas! No complaints about having to work on Christmas--instead, it seemed Mary and her staff enjoyed preparing for it.

I see a lot of folks like them. Their work is more of a "calling" and not just a job they do for a paycheck. I feel so lucky to be around such good hearted people and it inspires me to keep going --even though I feel like I'm at the end of a marathon race. Just two more days left of the holiday... one more push. I can do it.

The sing along today was really a lot of fun. One of the daughters of a resident came and sang next to me and often would put her arm around me or make faces or gestures acting out the songs. It was such fun to have help singing with me and it really raised my spirits. I am now resting before I go out one more time today to sing for some nursing home residents.  I was given a sparkling Christmas lights necklace by one of the residents today and I'll wear that tonight.

Soon it will be Christmas day. Have a very Merry one!

Posted by Blue OConnell at 1:23 PM No comments: 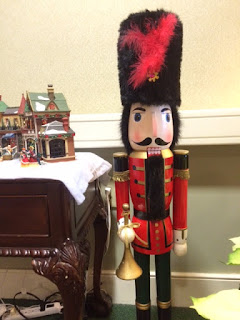 I love this time of year and yet... and yet. It is also very hard to navigate all of the social goings on and holiday traffic and extra activities placed on top of an already full life. I played two holiday parties where I had two people speak rudely to me. I understand though, it's a busy time and we all have full plates.

To maintain my balance I have been trying to be sure I have some time alone to be outside or play around on my guitar or read or do some artwork. I was sick for nearly two weeks in the beginning of Dec. and learned that I need to keep my balance.

Don't get me wrong though, I do love the music and bringing cheer to others. I just know that in order to do this, I need to be sure I am well and rested and in good spirits. There's a lot going on this time of year. It's also a life review time as I just had my birthday and it's the end of the year and lots on my mind.

Still though I know this time is not just about joy but also about struggle. It is about finding the light in the darkest days. I do my best to be happy even when others are stressed and rude. It's part of my job as I am around a lot of people all the time and everyone is trying to keep things together.

I wanted to say hello from holidayland and wish you some peace amid the hustle and bustle and take some time to be in the silence. Now...off to another gig. :)

Posted by Blue OConnell at 1:35 PM No comments:

Feliz Navidad and playing for the caregivers 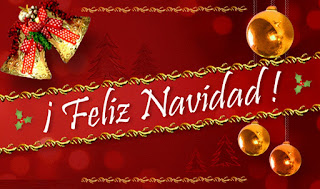 Magical moments emerge out of a given gig in unexpected ways. Last night some of those moments came while playing for a group of older adults with dementia.  I play there twice a month after dinner calming guitar musical selections I call, "Sundown Serenade." Evening is often a confusing and anxiety provoking time for those with dementia and the music helps to relax them.

Many times while I am playing those working as caregivers get to have a bit of a break and sit at the table and talk and have something to eat. I often feel invisible (which is a nice feeling, actually!) as I sit playing my guitar and observe the night unfolding at the nursing home. I started the evening's music with some pieces I composed myself just to get the music flowing in the room.

As I warmed up, I started playing some familiar songs like, "Fly me to the Moon,"  "What a Wonderful World."  Then when I played, "What the World Needs Now," I saw one of the caregivers stop what she was doing and look over at me with an expression of recognition and fond memories surfacing. After I finished playing the song, I said: "Dionne Warwick." She smiled and said, "That was bringing back memories."  That inspired me to go through more songs of that era--songs like, "Baby, Now That I've Found You," "My Cherie Amour," "You Are the Sunshine of my Life."

This led to a conversation about the music of the 60s and one of them asked how I knew all those songs. I told them I grew up on those songs and loved the music of Jose Feliciano and other guitarists of the time. One of them asked, "Do you know, "Feliz Navidad?"  Yes I said and as I started singing it, all of the caregivers in the room joined in singing to the residents.  We laughed and sang more Christmas songs and then the residents also joined in. "Joy to the World," "O Come All Ye Faithful," "The First Noel."  It gave such a feeling of togetherness in the room that was not there before. Like I said, I don't mind being in the background and playing instrumental music to relax but it is always such an honor to be able to really connect with people with music.

There are times I do focus on connecting with the caregivers and I am always rewarded in doing so. As I got ready to leave one said, "I loved tonight!" I did too and they all said how much they enjoyed seeing me again and the feeling was mutual.
Posted by Blue OConnell at 4:28 AM No comments: