what a quarter can't buy 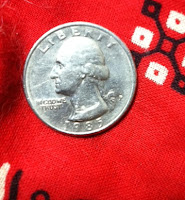 Today I sang at a new (to me) nursing home to one of the most responsive and warm group of people I've ever sung with.  We sang all of the old songs learned in school, "You are my Sunshine", "Clementine", "This Land is Your Land", "My Bonnie Lies Over the Ocean", etc. I am always struck by how these old, simple songs strike such a deep chord in people. I never would have imagined the happiness they can bring to us.   Each of them sang loudly with a big smile on their faces and we laughed at the funny songs and talked about the more philosophical ones.

When we sang, "Swing Low, Sweet Chariot", I told them the story of when I was a little girl, it was my favorite song and I would sing it to myself to sleep. My father used to get angry and come in my room and scold me and say, "I said stop that singing!" and no sooner would he close the door, I'd start up again.  We all laughed today at that story and I said, "see? it paid off didn't it? --me singing in my bed all night!" I wonder if my father as an angel smiles at me from afar when I sing these old songs he told me to stop singing.

When our hour of singing together was finished, I was approached by several of the people there hugging me and shaking my hand. One woman took out a quarter from her purse and slipped it in my hand and said, "get yourself something to drink." I said, "no, you need that for yourself!" but she only drew me to her and hugged me and kissed my cheek and said softly, "I love you."

And so I just got out of bed to tell you this story and I took a picture of this quarter to show you. It can't buy much from a store but it sure makes me smile to see it.

Way Beyond the Blue 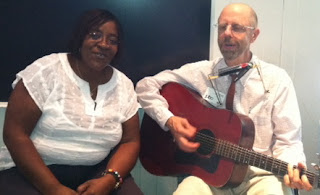 Sang at JABA today with Ben (above) and was treated to meet Felicia (above) who truly has a gifted voice. Ben and I sang for awhile when finally he asked if I knew any gospel songs and that's when Felicia appeared and wow what a voice and spirit!   My favorite she sang was this old one, Do Lord"--see if you remember it:

I was feeling a little low energy today (allergies most likely) and after singing with Ben & Felicia and the JABA gang, I am ready to conquer the world! (well, not quite but you get the idea :)

Thanks to Ben & Felicia for your uplifting music today! 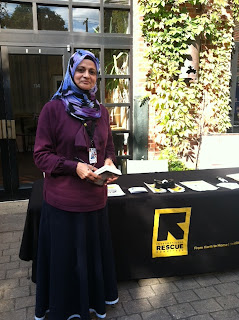 I had the honor of playing traditional American songs at the International Rescue Committee (IRC) today where they teach refugees English. We were celebrating new American citizens. I enjoyed meeting some of our new citizens and learning about all of the work and tests they had to take to get their citizenship.  It is something we Americans don't think much about but to see their eyes light up and their faces full of pride for their accomplishment was such a good feeling. Growing up in Chicago, I have memories of being in class with kids from all over the world. Back then they didn't have ESL programs and things are very different now.

After the mayor spoke today, I led our songs, "America the Beautiful" and "My Country Tis of Thee." Then people went to have cake and chat, so I got out my mountain dulcimer and played in the background. I got a lot of people ask me about this American instrument (one of few truly American instruments)  Here is a link about the Galax dulcimer written by my teacher and master player Phyllis Gaskins.

Pictured above one of the volunteers at the IRC who was kind enough to let me take her picture.
Posted by Blue OConnell at 3:24 PM No comments: 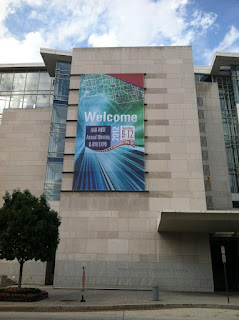 I hardly know where to begin to tell you about this very important music presentation I did yesterday in DC at the American Academy of Otolaryngology's  National conference.  They found out about me from the article I had published in the March in  The Hearing Journal. The article is an in depth look at the aural rehab I did with a music teacher after the activation of my cochlear implant (CI) to regain music perception. Many CI recipients talk about the difficulty in pitch perception in music and the work I did with a music teacher helped me to retrain my brain and CI for this. (see link above for the Hearing Journal article)

So yesterday it was quite an honor to play for thousands of people all over the world on the biggest stage I've ever stepped upon.  I began the ceremony by playing instrumental guitar music (many of my own originals) as audience members were being seated. After this segment,  as I walked backstage, they played music from my CD, "Choose the Sky". It was an amazing feeling to hear my own songs being piped into a National conference.

I then waited backstage while others from the organization made their remarks and welcomes. Then my name was called and as I walked up the stage, my song, "How will I know" was playing over the intercom. I will never forget this feeling of joy walking up to the podium and the bright lights blinding me as I stood there to speak.

My speech was of my story of how otolaryngology transformed my life.  Because of my CI surgery,  my dream of becoming a professional musician has come true.  As I stated in my speech, I never felt my hearing loss interfered with my music but it created a lot of obstacles in communicating with others. How could I book gigs if I could not hear over the phone? How could I converse with venue owners on my breaks at a gig? How could i explain that I can hear well enough to perform but I could not hear enough to represent myself.

As you all know now.. because of my CI procedure, it has given me my hearing back. Not that it was a "magic wand" though and what I mean by that is --I did have to do a lot of work to regain my hearing in addition to the surgery. It is not like a "plug and play" situation like a hearing aid.  Others who know of CI recipients understand this.

So anyway.. I said my speech without having to look at my script I wrote and after that was over, I moved to center stage where my guitar was brought out to me and I sang, "Choose the Sky". Because both my speech & song had to be no longer than 5 minutes, I had to shorten my song. I chose to end the song with the line, "it's never too late to dream."

it's hard to see the image of the poster in the above picture, so here it is in a close up: 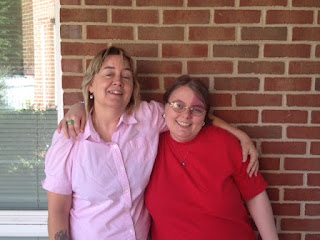 Here I am with Lori at MeadowCreek after our monthly sing along. She wanted to get her picture with me and that was such a compliment. It's the second request I've gotten to be photographed with me. Little do they know, I have a slight phobia about posed photos. I never seem to look like myself and always seem to have my eyes half closed, or a double chin or something very unflattering. There, I just revealed how vain really am! ha ha! No.. really.. I wanted to post this because I can't say enough how much these people inspire and uplift me. Here we are in the middle of a brutal election, a terrible recession, new cheap housing developments going up next door and all over town, etc. There are lots of negative things to think about. But a single smile from one of these people makes me know that life is much bigger than all that negative stuff.

We do look happy though, huh? Smile, you're on candid camera! (not really...and yes I just dated myself! :)

Posted by Blue OConnell at 4:06 PM No comments: