A child's joy of dancing

Today I played my guitar in the lobby at my gym. It’s always interesting who stops to listen or chat. Today a little girl (about age 5) came and started dancing. She twirled around gracefully and it looked as though she was a natural at ballet. A crowd gathered to watch her as she twirled and danced. Everyone was smiling as they watched her, but she was oblivious to her growing audience. Her proud mother stood next to me, taking in the joy her daughter was bringing us.

In her grand finale, the little girl spun around so many times, she fell to the floor. She did not seem to notice - she got up and danced more 🙂 such a good moment.

With all the bad news going on each day, it was so good to experience this joy.
Thanks for reading!

http://www.edwardsfineinstruments.com/
Posted by Blue OConnell at 4:37 AM No comments: 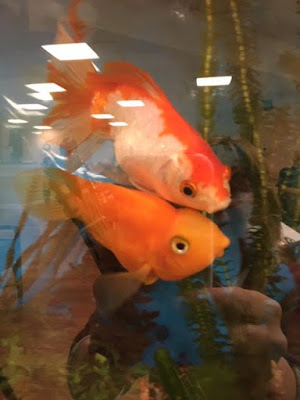 There is a big fish tank at one of the nursing homes where I play.  I joined an elderly resident in watching them before it was time for me to play.  Delighted by the colorful creatures, the woman asked, "I wonder if they can hear the music?" I said, "Let's watch and see. "

And so we did. :) And it appeared that they can hear music.  Of course that is likely no surprise to you but I had never thought of it before. I noticed they came closer to the glass during the song, "Singing in the Rain."  I turned to my fish loving friend and said, "Hey they liked that song!"

Always a lot of fun to get to know the residents. Music brings out the best in people and now I want to see next time what songs the fish noticed. Someone suggested I play, "Beyond the Sea." for them.

what song do you suggest? :)


Posted by Blue OConnell at 8:32 AM No comments: