Happy Earth Day to All! 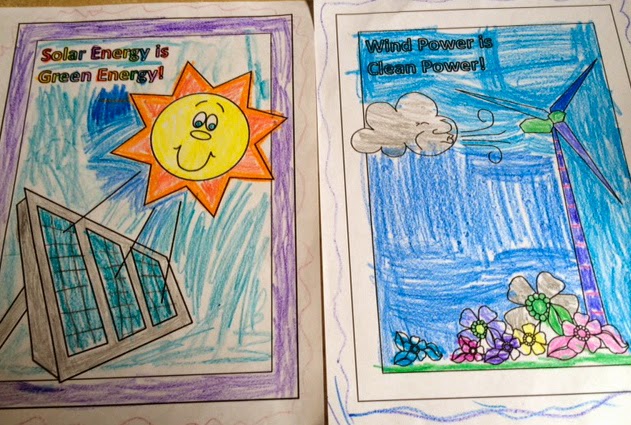 Happy Earth Day to All! The last two days I had the pleasure of teaching first graders at Greer Elementary all about Earth Day. We sang songs about recycling, caring for the earth, learned about a day in the life of trees and different Habitats.   I love to see that children are so smart and I hardly had to "teach" them, as they already know so much. For instance, I was telling them that we could all eliminate being wasteful by reusing some things again. I brought with me a chipped coffee mug and asked them what might I use it for? Answers, "to plant a flower," "to hold some pens/pencils," "to bring to the beach to make a sandcastle," "to use as a pail." I also showed them a plastic water bottle and asked them what would be better than to have this disposable bottle? Most of them held up their own decorated water bottles they use again and again.

A funny thing happened during our afternoon class --the electricity went out. The perfect setting to talk about saving on power and things we could do. Things like: hand wash dishes (instead of dishwasher), hang clothes outside to dry, make a compost, rake instead of leaf blow, etc.

Their favorite song we sang was "The Earth is Our Mother," a traditional Native American song. They understand that while some people go to church and sing about God, Native Americans sing about the Earth.  I also taught them to sing, "Happy Earth Day to All" (to the tune of "Happy Birthday") and they got it down right away!

We were even visited by the local news! (link will be supplied later!)

Posted by Blue OConnell at 10:43 AM No comments: 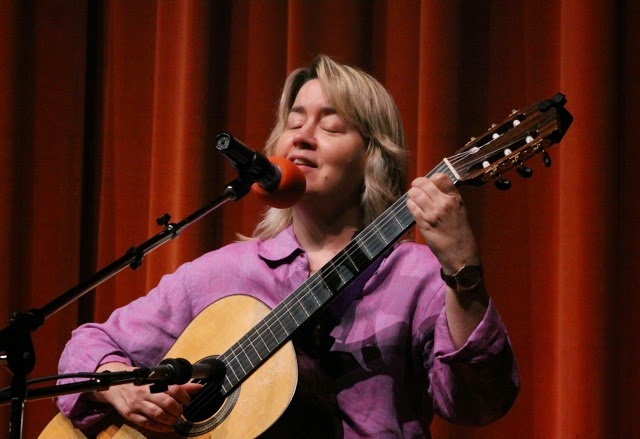 Today I am being featured on the Cochlear Americas blog about my cochlear implant journey. The content of the blog is my essay that won 1st Prize in an essay contest this past September. Most people know that I am a cochlear implant recipient. It has been a fascinating journey! Because of it, I have traveled to Arizona State, Northwestern University, Vanderbilt (Nashville) and University of MD to participate in cochlear implant research. I have met many people and done many things I would not thought possible had it not been for my cochlear implant experience.

Here is a link to the blog post on the Cochlear Americas blog and thank you all for your continued support! 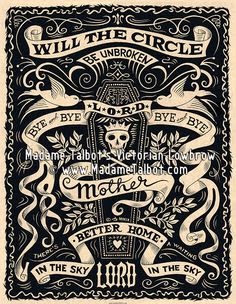 As a therapeutic musician, I am often asked what kind of music I play. The answer is --all kinds! It all depends on who I am playing for.  When playing for a patient, I first consider their medical condition before choosing. Often times they are too ill to digest a song with words and so I play something very simple on my guitar.  A few chords in a familiar key and style could bring them a sense of home and comfort.

Yesterday at the hospital, I was sent to an elderly woman's room who was said to be sad and discouraged for being in the hospital so long. I don't often sing but I knew by looking at her that she'd respond best to songs. She was sitting up in a chair (a good sign) and I sang, "You Are My Sunshine." She immediately joined in. I had a feeling she was a singer. After that, she asked for some Old Time music like, "I'll Fly Away." That led to singing, "Worried Man Blues." Maybe you've heard it? Here are  the lyrics to the chorus:

I changed them to say, "It takes a worried woman to sing a worried song." and she laughed and sang right along. We also sang a Carter Family song, "Keep on the Sunny Side."  We then sang the old song, "Will the Circle Be Unbroken." I was just talking to someone about this song last week. He said, "that song is about watching their mother being carried away in a hearse." I said, "that's why people like it!" We sometimes think we should shy away from a dark song that talks about death and struggle but I've seen it over and over that these songs bring such a sense of catharsis and comfort. Mind you, these are the kinds of songs she asked for.  I know this genre of music would not be healing for someone who prefers jazz, for instance. It helps to know something about where a person is from and their background.

Many of the Old Time songs were written by people going through a dark time. They are meant to help people remember that we've all got to cross that lonesome valley and there is no one who can cross it for you. (words from the Carter Family song, "Lonesome Valley Blues."

We ended our session with "Amazing Grace." This song really moves me to sing at the hospital. There is that verse:

Through many dangers, toils and snares
I have already come;
'Tis Grace that brought me safe thus far
and Grace will lead me home.

These people know the power of those words and singing them brings them hope and comfort. It was quite a privilege to sing with this woman yesterday. She really brightened up and looked radiantly happy after singing together. Good medicine!
Posted by Blue OConnell at 5:31 PM No comments: