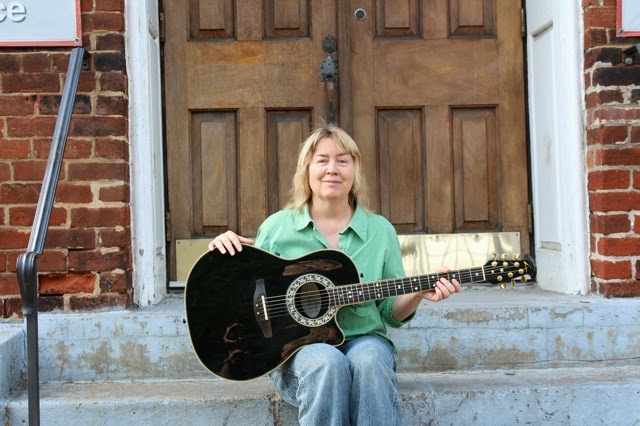 Back in 1992 I bought a shiny black guitar that now has the ability to change lives. This is because this guitar used to belong to Dave Matthews during the years 1991-92. It is quite likely Dave wrote the songs that became the foundation of the DMB career with this guitar.

The guitar is going to be auctioned off at CharityBuzz.com in May with the proceeds to benefit the Music Resource Center here in Charlottesville. It's a guitar I used to record my first album "Lines of Change" on too.

The story of how I came to own this beautiful guitar and donated to the Music Resource Center (MRC)  is best well summarized by the story in the Daily Progress article here.

Above I am pictured with the guitar on the steps of the MRC in October of 2013, the day I donated it.

I work as a certified music practitioner  playing therapeutic music for patients in ICU at UVa Hospital. I also work with people with special needs for VSA arts and back in May I won an award for this work.

I love to play at weddings (classical guitar) and write my own songs. You can listen to samples of my wedding repertoire here. Other music I compose, you can find here. I appreciate your support for purchasing my recordings!  Thanks to all who have done so!
Feel free to get in touch by email or leave a message here!
Posted by Blue OConnell at 4:55 AM No comments: 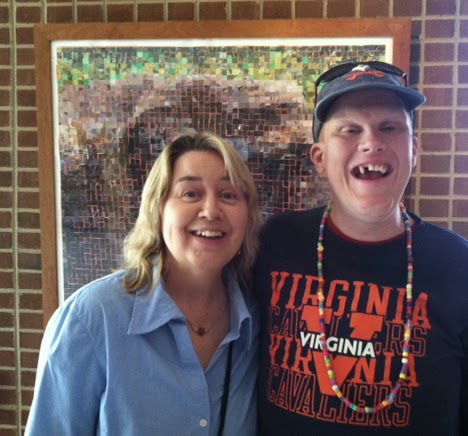 Yesterday was the annual VSA Music Recital  here in Charlottesville. VSA is one of the organizations I work for which promotes the experiences in creative expression with people with special needs. And special people they are!  I feel so lucky to know them and sing with them and share remarkable experiences with them.

The concert featured solo and group performances of songs such as, "Rainbow Connection," "Lean on Me," "Just a Closer Walk with Thee,", "California Dreamin'".  There is also the dynamic drumming with Whit Whitten's Drum Call groups. Always a favorite.

Everyone gets dressed up and it is exciting to perform on the big stage at the Martin Luther King Performing Arts Center. How many local musicians get to say they've performed there? It's a big deal.

Once again, I come away from this experience feeling so lucky to be part of this wonderful organization and people. Thanks!

Posted by Blue OConnell at 6:29 AM No comments:

A Summary of Spring Music 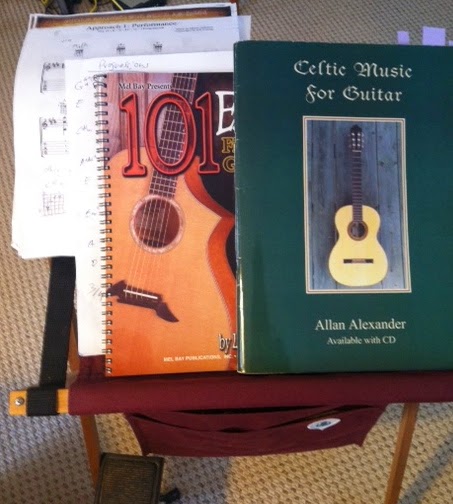 What a great week it's been for music. Monday I sang with a group I've been singing with for the past 2 years (nursing home). This group has recently gotten some new residents and the change is remarkable! It used to be that most of the time no one would sing and I'd endure them sitting there staring at me or falling asleep. Not last week! The few new ones sing loud and strong and it got others who didn't sing before to sing. I was surprised in a good way. What a big change!

Tuesday I sat in on a rehearsal of the Charlottesville Municipal Band in the percussion section. I started out as a musician playing percussion in high school band. But it had been nearly 40 yrs since I've attempted to play percussion in a big band. Needless to say, I was pretty overwhelmed. At times intimidated too. The thing with percussion is that unlike other band parts like a horn, it would be fairly easy to blend into the group that all plays the same part. Not so with percussion. That means every note you play everyone in the room can hear. If you hit the crash cymbals in the wrong place, guess what? Yeah. So I played bass drum but was constantly loosing my place --even so, I managed to play along and I did the best I could.   In all, I believe in taking risks and doing things that take me beyond my comfort zone. That is the best way to learn and grow. As it stands, we've decided if I want to join the band to try again in the fall. Summer is a busy time with a "brutal" (according to percussion director) rehearsal schedule.

Lastly, you see picture above my music stand with a few things on it. I have one book 101 Easy Fingerstyle Solos that I use to site read. What I like to do is play a tune a couple times through and then improvise different variations and chords. There are times when I play bedtime music for people dementia to help calm them and I play continuously for an hour. Easy pieces like waltzes, Celtic tunes, old folk songs are good to work in and improvise around.  It is one of my favorite things to do.

Spring time brings in new sounds. I love the songs of the birds outside that mingle with my music. Happy Spring everyone! (better late than never)
Posted by Blue OConnell at 1:39 PM No comments: 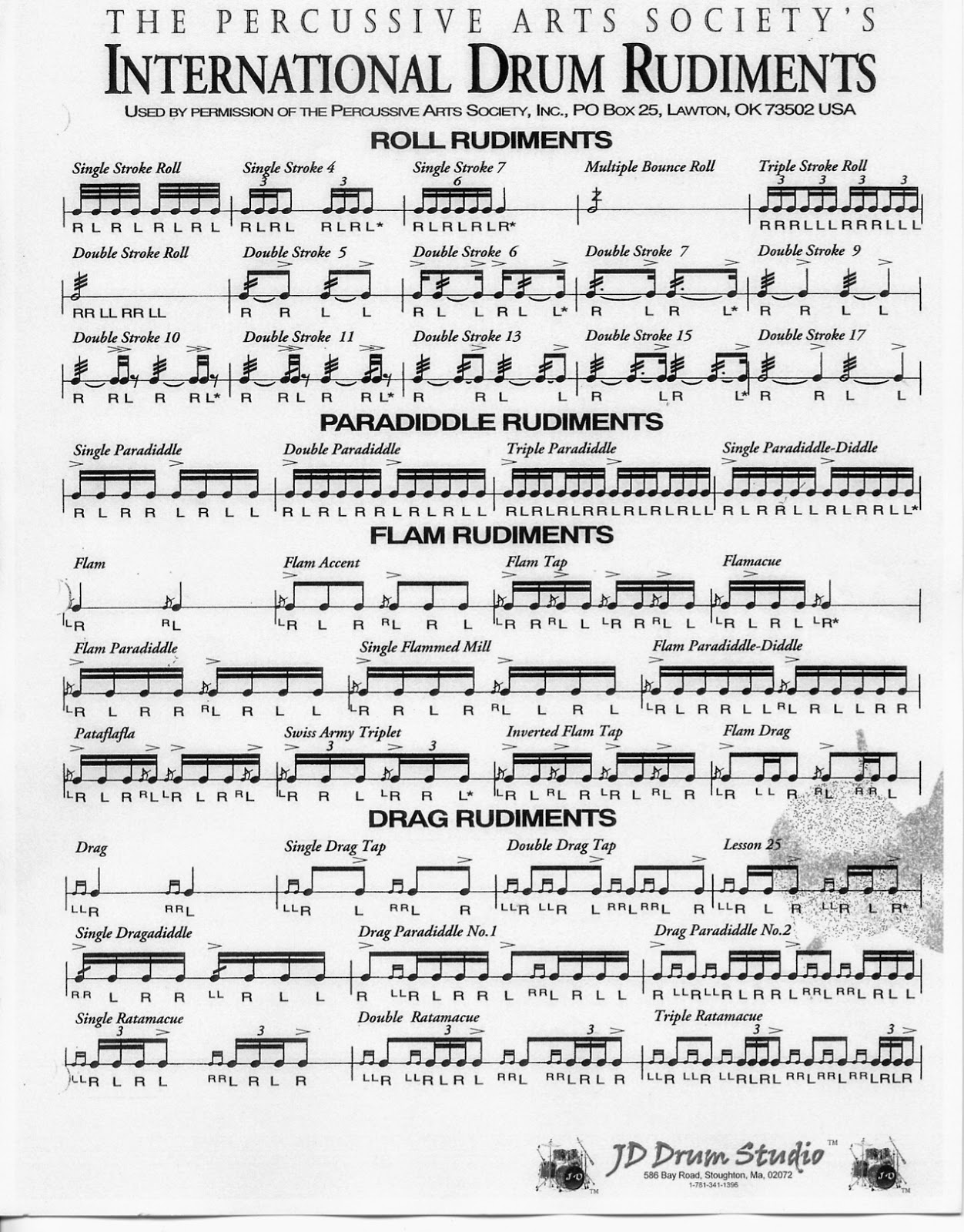 I began my musical journey playing percussion in high school band. I was best at the snare drum but loved playing the timpani and mallets too. Years ago I belonged to the Percussive Arts Society  and I  still have my membership card from 1975. (wow)   That year I participated in an event called, "The Uncontest" where I played a drum set solo for 3 different teachers.  My solo was titled, "Wipe In" (a play on the famous "Wipe Out" solo).   Our sessions were recorded--both my solo and the teachers' feedback. I will never forget my first performance of the piece, I botched the ending so badly that it made me roar with laughter every time I listened to it.

What also happened that day was I ended up winning an award for it. The thing was though, I did not go down to receive it -even though my name was called 3 times. Part of it was due to some hearing loss that went undetected and the other part was me saying, "Nooooo, it can't be. It must be some other O'Connell." So, imagine my surprise when I went to my drum lesson the following week and my teacher presented me with my award. Huh. I really did win something! I don't know what happened to that certificate but it was the last time I ever won anything like it.

Over the years, I have continued to play percussion in the form of hand and frame drums. Bodhran, djembe, doumbek, tambourine. Back in the early 2000's I played snare in a local pipes and drum band.

Today, I got out my drum sticks and practice pad (like a snare drum) and my rudiments (exercises for technique pictured above) to get me ready for tonight sitting in on a rehearsal with the Charlottesville Municipal Band.
It's been  many years since I've played band music but I am really excited to try it out again. If all goes well, I will be wearing black and playing in the summer schedule. I'll let you know how it goes.

By the way, "Mississippi Mud" is a phonetic way to remember how a 5 stroke snare drum roll goes. (the count of it). That was a trick I learned in band way back when!
what fun awaits!
Posted by Blue OConnell at 9:39 AM No comments: 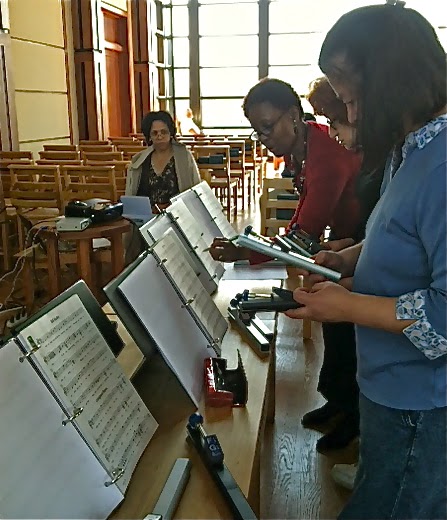 This past weekend was a great time at the meetup with others in the Association of Adult Musicians with Hearing Loss (AAMHL) .  It's an organization I've belonged to since I got my cochlear implant in 2009. Others in the group share their love of music in spite of severe hearing loss. Pictured above are my friends Wendy, Janice, and Angela working out their parts for the hand chimes ensemble workshop. This was a lot of fun as some of us in the group are especially challenged when it comes to playing in an ensemble for it can be hard to hear themselves over the others.  This challenge was met by having a looping device around us with our hearing devices in "telecoil mode".

We also had a CART Provider, (pictured in the background)  who put our verbal instructions into captions on a large screen in front of us. You all have seen this in court rooms. In fact, our CART provider, Lois Boyle  does court captioning too as well as Broadway productions. It's a fascinating profession and I enjoyed learning more about it from her this weekend.

In addition to hand chimes ensemble, I gave a workshop on musical improvisation   and we all shared some songs we're working on too. We also watched the excellent documentary, "Lost and Sound"  about others with severe hearing loss and how they lost and later found their way back to music.

It was a fine time and I really enjoyed myself!

Posted by Blue OConnell at 8:39 AM No comments:

Dem Bones of mine 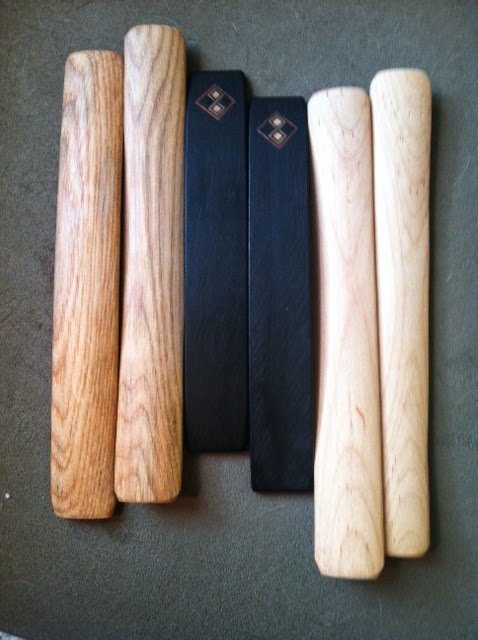 I recently started a small rhythm bones collection. Above pictured from right to left are bones made of hickory, ebony and maple.  The hickory and maple bones are minstrel style bones which means they are shaped like ribs. These are the old traditional style bones that were played back in the old minstrel shows. My ebony bones are from Ireland and played in (you guessed it) Irish music. There are lots of ways to play the bones and they are a lot of fun to play. I am still a beginner using a two hand approach but hoping to get some good licks down soon, so I can bring them along to my shows at nursing homes.

These are fun instruments to learn and there is even a Rhythm Bones Society where you can learn all about players of bones and how to play them. There's lots of information out there.  Folk music enthusiasts would be familiar with the popular old time band Carolina Chocolate Drops.  They take the old time songs and really jazz them up good! Here is a video of Dom Flemons playing fast and wild bones here:

I am having a good time playing these things, although I must say my cat Jasper does not like them at all. I suspect once I master them a bit more, he will sleep through it all just as he does my other musical endeavors. Have you heard of the bones before?
Posted by Blue OConnell at 6:20 AM No comments: