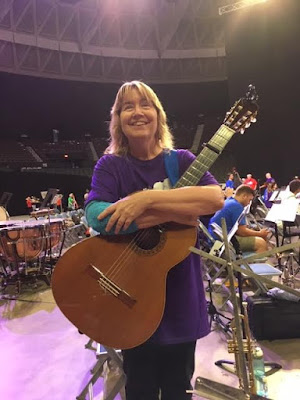 This past weekend I had a wonderful experience at the Virginia Symphony Orchestra CommUnity Play-In and Sing Along   It was special for a number of reasons. One is that I went with friends from the Association of Adult Musicians with Hearing Loss (AAMHL) which is a really good group of people.   With the help of Access Virginia  we had live captions streamed to our cell phones and a hearing loop system (which allows us to hear directly into our hearing aids/cochlear implants (CI) devices. There was also a sign language interpreter.

For some of the people in AAMHL, this was their first experience participating in such a big event in a huge arena with so much sound. Without assisted listening devices, it would not have been possible for them to participate fully without being overwhelmed by background noise. We were all very happy to be able to not only participate in such an event but to make history by making the event accessible to those with hearing loss and disabilities.

The other reason it was special is that the concert and event commemorated unity, brotherhood and peace.  It was a response to the white nationalist attacks that took place in Charlottesville in August 2017. More and more we need to come together and understand one another. Black and white, rich and poor, no matter what your religious affiliation, ethnic heritage, age, gender or sexual orientation.  Music brings people together and it was great to feel that Unity.

Among the songs we played and sang were, “Finlandia,” “Amazing Grace,” “America, the Beautiful,” “Ode to Joy,” among others. You can see from my picture that it was a happy and proud moment.